A new look for Makaracetus bidens

In Trunks, Proboscides & Makaracetus, I argued the extinct whale Makaracetus bidens probably didn’t have a “trunk” or “proboscis”, contra Gingerich et al. (2005). For one thing, an overhaul of terminology resulted in ‘trunk’ no longer referring to a nasal appendage, ‘proboscis’ being restricted to tubular nasal/lip structures capable of grasping food, and all other elongate nasal structures being termed ‘prorhiscis’ (Milewski & Dierenfeld 2013). Makaracetus certainly had over-developed facial features compared to its cetaceous relatives, but it didn’t appear any more likely to have a “trunk” than, say, a camel. 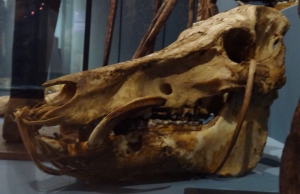 One feature of Makaracetus I didn’t discuss in the last round were its maxillary fossae, which Gingerich et al. noted were also present in pigs. This feature is plainly visible on the boar skull above — it’s the virtual trench running from the orbits down the snout. These fossae provide attachment for the maxillolabialis superior and inferior, which are responsible for moving the protruding snout (Gregory 1920). 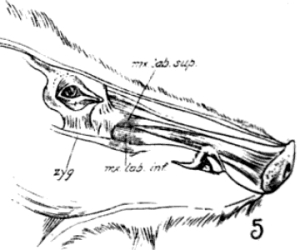 What’s interesting is that pigs almost fit the definition of having a proboscis. Pigs can apparently grasp food items with both their nose and lip musculature, but fall short of the definition since only the disc is mobile (Milewski & Dierenfeld 2013). Does this mean Makaracetus may have had some sort of proboscis after all? Probably not. It’s notable that one trait shared by proboscides owners is directional olfaction (Milewski & Dierenfeld 2013), which seems like an unlikely trait for a cetacean to evolve, considering they lack the ability to smell underwater. Furthermore, pigs don’t have exclusive rights to maxillary fossae.

Kangaroo maxillary fossae bear a surprising resemblance to those of Makaracetus — they’re similar in extent, only present anterior of the antorbital foramen, and are on the lower half of the rostrum. Unlike pigs, the maxillary fossae of kangaroos provide an origin for part of the buccinator muscle (Gregory 1920). The fossae are also present in baboons, where I suspect they have something to do with this display. Maxillary fossae also appear to be present in llamas but apparently not camels, for some reason. Considering the apparently variable functions of maxillary fossae and the additional premaxillary fossae of even more mysterious purpose, I’d agree with Gingerich et al.’s interpretation of “hypertrophied facial muscles” for Makaracetus and hesitate to speculate much further.

So if the nose of Makaracetus didn’t bear a proboscis or prorhiscis, what did it do? Perhaps the expanded nasal vestibule was merely a side effect of the snout warping into a down-turned shape. Another parallel could be found in Gray Seals, which have nasals retracted to a similar degree as Makaracetus and enlarged noses which function as displays (Miller & Boness 1979); however more specimens will be required to conclude that the trait was sexually dimorphic. Milewski & Dierenfeld (2013) hypothesized that the enlarged nose of Moose may act as a buoy to counterbalance to forelimbs when foraging underwater, a trait which could be beneficial to the apparently benthic-feeding Makaracetus. However, Makaracetus appears to have a much smaller nasal chamber than Moose, so the potential benefits could have been minimal.

I reconstructed Makaracetus as a Hippo/Manatee/Walrus-thing up top, but I suspect my endeavors were far too conservative. Makaracetus was a beast without obvious parallels and its true appearance can probably never be known. Still, there’s no reason to go slapping a “trunk” on strange-looking skulls, and I hope Milewski & Dierenfeld (2013) will get the attention it deserves and open minds to the myriad other possibilities of big, weird noses.

Gregory, W. (1920) Studies in comparative myology and osteology, No. V. — On the anatomy of the pre-orbital fossæ of Equidæ and other ungulates. Bulletin of the American Museum of Natural History 42 265—283. Available

1 thought on “Cutting off the Trunk to Spite the Whale”