In 1968, the Second Street Expedition across Iran collected what appeared to be a Persian Horned Viper with a Wind Scorpion attached to its tail. Examination of the specimen in 1970 revealed the apparent arachnid was actually a growth, but it could not be determined if it was some sort of reaction to a parasite, a tumor, or caused by genetics. A second specimen bearing a pseudo-arachnid was captured in 2001, and it became apparent that an entire species possessed this trait — Pseudocerastes urarachnoides (Bostanchi et al. 2006) Two live specimens were collected in 2008 and the tails were filmed in action:

An unnervingly convincing Wind Scorpion probably doesn’t seem very appealing to most humans — if urban legends about “Camel Spiders” are anything to go by — but Bostanchi et al. (2006) hypothesized the heavily modified tails are used as lures. To test this hypothesis, Fathinia et al. (2009) introduced a chick to an enclosure containing a snake; after half an hour the bird pecked the knob-like portion of the tail, was drawn in towards the head, and was struck and killed. The only animals P. urarachnoides has been known to prey on so far are birds, although it hasn’t been ruled out that other potential Wind Scorpion predators such as small mammals and reptiles are also sometimes taken (Fathinia et al. 2009). Aside from the confirmation of a caudal lure, examination of live specimens also revealed the scales are far more prominent than those of any other Iranian snake, possibly due to either the body being inflated or dermal muscles (Fathinia et al. 2009). 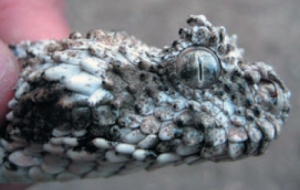 There is undoubtedly much about the biology of the Arachnid-Tailed Snake* that remains to be learned. The extent of its range is not certain, although it was recently discovered to overlap with two other Pseudocerastes species (Fathinia & Rastegar-Pouyani 2010). These “Gypsum Snakes”, as they’re known to some locals, are found in hills primarily made of gypsum and are hypothesized to ambush prey from bushes located near their burrows; however, there are anecdotes about them also ambushing prey from trees (Fathinia et al. 2009). I, for one, would be quite curious about any other “ethno-known” traits of this snake and how they stack up with reality.

* I’ve seen the name “Spider-Tailed Horn Viper” used, but the lure isn’t unambiguously spider-like. One local name is “Feathered Snake”, which is curious considering its diet. 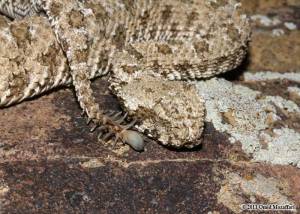