I’d bet that most casual observers of Harbor Seals (Phoca vitulina) are under the impression that the little pinnipeds are almost neckless. Of course, it’s not immediately obvious what the skeletal proportions are underneath that blubber, but judging by the forelimb origin, it would seem the neck is less than half the length of the head. Harbor Seals are hiding more neck than what they let on, as their cervical vertebrae are actually similar in length to the skull:

Clearly the live animal above was not holding its neck in the same posture as this skeleton, and (not having X-Ray specs) I’d assume it was similar to the deep “S” curve in this Harp Seal. As for why seals would shorten their apparent necks so dramatically, King (1983) suggested phocids (“true” seals) require a spindle-like shape when swimming since their propulsion comes from oscillating the posterior end of their body. But why bother having a neck at all? A strongly retracted neck gives seals “slingshot potential” to capture prey (Rommel & Reynolds 2002), as alarmingly demonstrated by this Leopard Seal. It’s surprisingly difficult to find photographs of Harbor Seals showing off their full neck — presumably they only do it rarely and briefly — but blogger Kitty Kono has an amazing snapshot:

From Kitty Kono’s blog Back in the U.S.A. Used with permission.

I of course covered all this in my Weddell’s Long-Necked Seal article, but now, I’ll take things further by determining just how long seal necks are. The tails and sacral vertebrae varied much more than what I expected (plus one source often lumped the two), so rather than measure necks relative to the length of the entire spine, I did so relative to only the thoracic and lumbar vertebrae (T–L from here on). And yes, there is going to be an appendix to this blog post.

Phocid necks range from 21% T–L in Bearded Seals to 35% T–L in Harp Seals*, which falls short of dogs with necks 40.5% of their T–L. Weddell seals were initially described as “long-necked”, so it’s amazing to see they’re at the low end of the spectrum with necks only 23% T–L. Contemporary sources almost always describe Leopard Seals as “long necked”, however their necks are only 29% T–L, so perhaps “thin-necked” would be a more apt description. The extinct seal Acrophoca is also typically described as “long-necked”, although judging from this skeletal illustration and mounted specimen, the neck is around 30% T–L. The closest true seals have to long necks come from members of the “tribe” Phocini (Phoca, Pusa, Pagophilus), although I have no idea why that would be the case.

* Piérard (1971) cites a source giving 35% for Harbor Seal T–L, so my figure above is probably a shorter-necked young individual.

As for otariids (“eared seals”) — sometimes described as having “snakelike” necks (e.g. Riedman 1990) — do they truly have long necks, or is this a deception from thin necks held out straight? Otariids require a considerable amount of mass before and after their foreflippers (their source of propulsion) for stability, and so they keep their necks out fairly straight (King 1983). Phocid and otariid necks have been described as “similar” in length (Rommel & Reynolds 2002), although just to be on the safe side, I’ll quantify this as well: 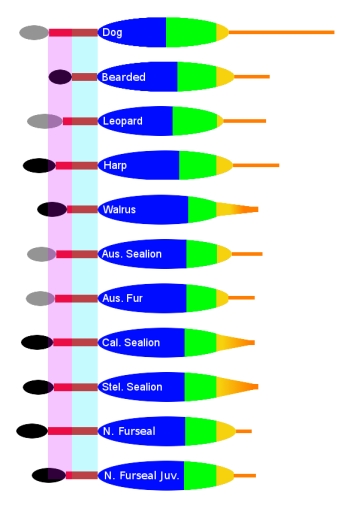 Otariid necks vary little, from 34.5% T–L in Australian Sealions (and most other being only slightly higher) to 41% T–L in Northern Fur Seals. So there is certainly quite a pronounced difference in neck length between Bearded Seals and Northern Fur Seals, it does not seem that the average phocid, otariid or walrus is not truly that different in neck length. It should be cautioned that proportional neck length can change considerably during maturity, so there is certainly some error in these figures. The Bearded Seal was reportedly an old female (Hayden 1880) so if anything, it may have had a longer neck than average.

One thing I haven’t mentioned so far is that pinnipeds have far longer tails than most observers would expect, ranging from 13.5% T–L in Northern Fur Seals to 41% T–L in Ringed Seals. I really have no idea why this would be the case.

Data from King (1983) were in percentage of the entire spine with no data on skull length. Some Data from Hayden (1880) is in millimeters, and for instances where sacral and caudal vertebrae were lumped, I signified this with “?” in the area for sacral measurement.

Experts are not immune from making mistakes, even really bizarre ones. Ahem. Take James Weddell for instance, a keen observer of pinnipeds and other marine life (Fogg 1992) who somehow produced the monstrosity above. The intended subject isn’t any old seal, it’s a Weddell Seal (Leptonychotes weddellii)… mostly. The circumstances behind this illustration are vague and contradictory but Fogg (1992) reasoned it was based both on a specimen deposited in the Edinburgh Museum* and Weddell’s memory of wild seals, which may have conflated Weddell and Leopard Seals. It’s probably notable that Weddell referred to his namesake as a “Sea Leopard”.

* Now the National Museum of Scotland.

Weddell (1825) included a brief description of his preserved specimen from one Professor Jamieson who noted the “long and tapering” neck and small head, and argued that Weddell’s Seal had dentition distinct from a Leopard Seal’s. The following year René Primevère Lesson named the species “Otaria weddelli” from Jamieson’s description and Weddell’s illustration but not an actual examination of the specimen, which apparently means Weddell Seals don’t have a proper type specimen (Scheffer 1958). Nobody seems to know why Lesson classified Weddell’s Seal as a Sealion (hence “Otaria“) although I’d suspect it was due to the slender neck. So… what’s up with that mysterious neck?

Hamilton (1839) described Weddell’s specimen as having a “proportionally very small” head and a “small, long, and tapering” neck, however the accompanying illustration makes it clear these traits are quite subtle, at least compared to Weddell’s illustration. Hamilton (1839) also took measurements — unfortunately “over the back” — but it’s still interesting that the distance from the snout to the base of the fore-flipper is 1.04 meters compared with a snout-tail length of slightly under 3 meters. It would seem remarkable for a “true” seal to have a head and neck length around one third that of the body, but in fact, it’s totally normal. 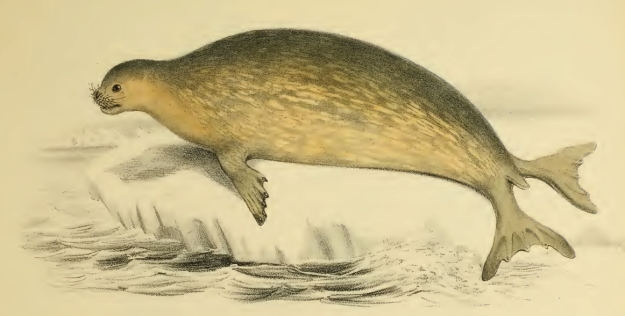 Weddell Seal in a more typical pose. From Richardson & Gray (1845).

Despite external appearances, seals and sealions have necks that are proportionally similar in length, although seals typically hold theirs in a deep “S” curve (Rommel & Reynolds 2002). I would highly recommend clicking on this link — the disparity between the external “neck” and the length of cervical vertebrae is truly astounding. As for why seals do this, it’s for “slingshot potential” to capture prey (Rommel & Reynolds 2002), so they’re apparently like snapping turtles, except they hide their necks in blubber rather than a shell. Anyways, Weddell Seals have cervical vertebrae that take up 14% of the vertebrae column (including the tail), and the series is slightly longer than the condylobasal length of the skull (Piérard 1971), so the proportions described by Hamilton are indeed plausible. The posture still seems odd — I can’t find any photographs of a Weddell Seal in such a pose — and I wonder if whoever mounted Weddell’s specimen did so Leopard Seal-style, since that species appears to hold its neck out fairly straight for a “true” seal. It would be interesting to see what the mount actually looks like, but unfortunately, I haven’t been able to track down any photographs.

Since I couldn’t provide a photograph of a Weddell Seal in a weird pose, this walrus will have to do:

I can’t help but think of Parson’s long-necked seal and if that was another example of a specimen mounted with an extreme posture whose morphology was exaggerated even more by an illustrator. Curiously, some early workers considered Parson’s and Weddell’s seals to be synonymous (Hamilton 1839), but whatever Parson’s seal was, it probably wasn’t an Antarctic visitor.

From the Museum of Comparative Zoology (Harvard)

Otter Civets (Cynogale bennettii) are a poorly known and endangered species of hemigaline viverrid from the Thai-Malay Peninsula, Borneo and Sumatra (Veron et al. 2006). There are also unconfirmed reports from northern Vietnam (“C. lowei“), southern China, northern Thailand and Java (Veron et al. 2006). The mount above appears to be this specimen, and was probably collected in Borneo in 1881 by Henry A. Ward. It certainly shows its age, but it’s no taxidermic aberration — photographs of live specimens show the whiskers and mystacial pads really are that ridiculously hypertrophied.

The illustration above demonstrates more remarkable morphology — the nostrils open dorsally, an even more extreme position than those of seals* and otters (Pocock 1915). Pocock (1915) speculated this feature allows Otter Civets to be ambush predators, picking off unsuspecting birds and small mammals looking for a drink. Nowak (2005) lists birds and small mammals as part of the Otter Civet’s diet and treats Pocock’s speculative behavior as likely, although it still appears to be entirely hypothetical. Any nature documentarians up for filming this potential mammalian mini-crocodile in action? Anyways, Otter Civets also have adaptations for activities below the surface as their nostrils can be closed with flaps, and their ears can be closed as well (Nowak 2005). While some early workers considered Otter Civets to have large orbits (Gregory & Hellman 1939), the eyes appear to be on the small side for a civet, which is unsurprising considering the vast array of whiskers.

* But not Leopard Seals, it would seem.

Otter Civet weirdness doesn’t stop at the head. Despite their closest relatives being plantigrade, Otter Civets are fully digitigrade (Gaubert et al. 2005), which is rather unexpected for a semi-aquatic species. The feet are broad with flexible digits and some webbing (Nowak 2005). The tail is curiously short (compare to the civets… and prionodontid… above) and lacks specialized musculature (Nowak 2005). Due to the lack of webbing and underwhelming tail, Nowak (2005) speculated that Otter Civets are slow and unmaneuverable swimmers specialized for capturing cornered prey, which ties in with Pocock’s speculation that the abundant whiskers are an adaptation for discovering hiding prey. Aside from terrestrial species, their diet includes fish, crustaceans and possibly molluscs (Nowak 2005).

Otter Civets are members of the clade Hemigalinae, along with Hemigalus, Chrotogale, Diplogale and, it was recently argued, Macrogalidia (Wilting & Fickel 2012). The skeletal comparisons above and below also include the Aquatic Genet (Genetta piscivora), a more distant relative that, as the name suggests, is also semi-aquatic. Gregory and Hellman (1939) discussed some minor skeletal traits shared by Otter Civets and Aquatic Genets but found the convergence to be minor. Otter Civet teeth really stand out: the elongate, serrated premolars are specialized for grasping prey while the blunt-cusped, rounded molars are specialized for crushing (Gregory & Hellman 1939; Nowak 2005). Gregory and Hellman (1939) also described an enlarged infra-orbital foramen and enlarged areas for muscle attachment anterior to the orbits which is related to the abundant whiskers and hypertrophied facial musculature, although it’s far less pronounced than what I would have expected. Curiously, there doesn’t seem to be any obvious anatomy relating to the strange position of the nostrils.

Otter Civets have been kept in captivity and have apparently been observed foraging in water (Vernon et al. 2006), although, full disclosure, I cannot find any specific information on its behavior in water. On land it has been observed doing some surprising things — climbing trees, as well as eating fruit and insects (Nowak 2005; Wilting et al. 2010) — although most observations appear to be fleeting glimpses. Otter Civets are typically photographed nears ponds and streams and are thought to primarily inhabit peat-swamp and primary forests, although they have also been observed in logged and secondary forest (Wilting et al. 2010, Cheyne et al. 2010). However, observations of Otter Civets are becoming increasingly uncommon and it is believed habitat destruction has reduced its population (Veron et al. 2006).

And on a somewhat more upbeat note, here is some of the first footage of Otter Civets in the wild:

Gregory, W. & Hellman, M. (1939) On the evolution and classification of the civets (Viverridae) and allied fossil and recent Carnivora: A phylogenetic study of the skull and dentition. Proceedings of the American Philosophical Society 81 309–392. Available